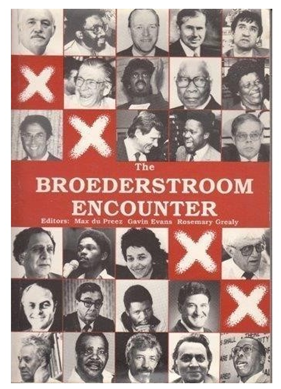 The road to non-racial democracy in South Africa was not straightforward, but moments of exceptional vision and courage marked the stumbling progress. This memoir recalls one of those milestones – an important event that took place in the Magaliesberg and helped to shape the new South Africa.

1988 was a dark year in our history. The apartheid policies of the National Party government faced international condemnation and local defiance and any opposition was vigorously suppressed. Many resistance movements were banned while others were infiltrated by police informers and their leaders detained or in exile. More than 8000 political prisoners were being held, many without trial or formal charges. In response, several anti-apartheid movements had turned to violence. The African National Congress and the Pan African Congress had each formed military wings, uMkhonto weSizwe and Poqo, and were committing acts of sabotage and intimidation. Township streets were ‘no-go’ areas in the hands of rebellious gangs, media reports fuelled pessimism and public opinion became increasingly polarised. Both sides carried out political executions – the state in prison gallows and interrogation cells, and the liberation movements using the terrible method of ‘necklacing’ (placing burning tires around victims’ necks). Civil war loomed with little prospect of peace.

The historic meeting
At this time of deep despair, a historic meeting shed a glimmer of light on the possibility of conciliation. During a weekend in August 1988 eighty people gathered secretly at the Gencor Training Centre (now the Alpha Conference Centre) near Broederstroom. Half were business and professional leaders calling themselves the ‘Creative Minority’. The other half were from Cosatu (Congress of South African Trade Unions), the UDF (United Democratic Front) and other church and liberation movements. They referred to themselves collectively as ‘Representatives of the Majority’.

The ‘Creative Minority’ fielded an impressive line-up including leaders of fifteen top South African companies and other prominent figures such as Frederick van Zyl Slabbert (IDASA), Chris Ball of First National Bank, Zach de Beer of Anglo American, Justice Anton Mostert, governance expert Mervyn King, Ann Bernstein, who is still active in development policy, Stuart Saunders, Principal and Vice Chancellor of UCT, and others. Many of them were harassed by government and conservative colleagues. (Soon after the meeting Chris Ball was forced to resign from the Board of FNB and leave the country.)

Most of the ‘Representatives of the Majority’ were also well-known, or were to become so, including Beyers Naudé, Dulla Omar, Jay Naidoo, Azhar Cachalia and Gavin Watson (later involved in the State Capture scandal). Even more telling than those who attended the meeting were those who had wanted to, but could not: Albertina Sisulu (under restriction order), Govan Mbeki (restriction order), Patrick Lekota (on trial), Popo Molefe (on trial), Murphy Morobe (in detention), and Cyril Ramaphosa, Cheryl Carolus and Frank Chikane who were under such tight surveillance that their presence would have revealed the secret venue.

Opening shots
Delegates arrived in dribs and drabs on Friday, 5 August. They exchanged polite, superficial greetings but suspicion and distrust were palpable. Similar meetings had taken place in Lusaka and Dakar where there had been no threat, but the Broederstroom Encounter was quite different. It was the first time that representatives from across the divide had met on South African soil and delegates on both sides approached the meeting with trepidation. Were there informers among them? Would there be a police raid?  Fear of betrayal was on everyone’s mind.

The following morning Christo Nel, the co-ordinator, opened the meeting with a two-hour overview of affairs in South Africa. If we need to be reminded of where we have come from, it is worth reading the 36-page summary of his presentation. It stands as one the most objective and comprehensive descriptions of what the country was facing at that time.

Nels’s presentation helped to dispel some of the mistrust and, after a tough question and answer session, the two delegations separated to consider their reactions. When they reconvened, they expressed respect for each other, but their positions were still far apart. Some of the ‘Representatives of the Majority’ suggested that the talks should be abandoned altogether. They believed that, because the business leaders were individuals with different viewpoints, they did not present a united ‘big business’ front against apartheid, so there was little point in holding discussions with them.

Christo Nel, Chris Ball and others valiantly held the discussions on track through the afternoon, but it was clear that the Creative Minority would need to become a united entity if the event were to be kept alive.

The Consultative Business Movement
Throughout Saturday night the ‘Creative Majority’ group wrestled with the formation of an organisation with a common policy. By the early hours of the morning they had managed to craft a mini constitution for a new movement. They called it  the Consultative Business Movement the (CBM) and set explicit goals and methods of achieving them. Today those goals seem obvious and simplistic – a single non-racial democracy, fair distribution of wealth in a strong economy, peace and stability, and open international relations – but for some businessmen in 1988, these were radical ideas.

When the meeting convened at 8.30 on Sunday the CBM received a lukewarm reception from the ‘Representatives of the Majority’. They were pleased to be dealing with a structured organisation, but needed to consult with their principals, Cosatu, the UDM, and (secretly) the banned ANC. They were especially concerned about the CBM opening international relations. The ANC at that time held the high ground on the international stage and they feared that another international player would be, in their words, “a major stumbling block”.

Despite this, the conference continued to discuss and examine critical issues – labour, local elections, military involvement, and the brutality of township violence. Gradually the two sides gained a better understanding of each other’s perspectives and found some common ground during the afternoon. In the months that followed the CBM grew in stature and influence and proved to be one of the most successful outcomes of the Broederstroom Encounter. The following year, when F.W. de Klerk, steered the National Party in a new direction, the CBM gave valuable assistance and later played a significant role in the 1990-1993 CODESA negotiations that led to a democratic South Africa.

The Broederstroom Encounter demonstrated that negotiations between polarised groups were possible at a time when many believed that there was no hope. The magnitude of its impact in a time of terrible violence, and the courage and persistence of those who took part should not be allowed to fade from our national memory. It is perhaps, especially relevant in today’s age of statue-bashing and rage in the Twittersphere.

A personal footnote
Ten years after the Broederstroom Encounter the ANC held a conference at the same venue, renamed the Alpha Conference Centre. The meeting was chaired by President Nelson Mandela and several of the original Encounter delegates were there.

In the conference room next door to the ANC, another meeting was being held to discuss ways of conserving the Magaliesberg. I was a speaker at that meeting and when the two conferences broke for tea, I had an unexpected opportunity to meet the President. I grabbed a copy of my book from a table where they were being sold and joined the queue to shake his hand. He accepted the book graciously and, glancing at my name on the cover, asked if I was related to the Australian boxer, Jimmy Carruthers (Mandela was, of course, an enthusiastic amateur boxer himself). I confessed that I was not related to Jimmy, but I remembered the famous fight when he knocked out the South African Bantamweight World Champion, Vicky Toweel, in the first round.

Who among those desperate delegates at the Broederstroom Encounter in 1988 could have predicted that within a decade their despair would be replaced by nation-wide optimism and a democratically elected President would be standing on the very same spot, discussing trivia about prize fighting?

For some of the information in this Memoir, I relied on a book published soon after the event, The Broederstroom Encounter edited by Max du Preez, Gavin Evans and Rosemary Grealy. At the time of its publication the outcome for South Africa was still unknown and it ends with a quote by one of the delegates, “We will be making a million mistakes, but that will be because we will be doing ten million things. That is far better than making no mistakes by doing nothing.”

Our Turbulent Past – Part 6