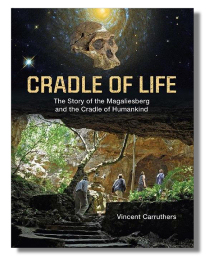 There’s an attractive landscape which, in my view, is not only South Africa’s most interesting few square kilometres, but, as a tourist’s ‘must see’, deserves higher ranking than Egypt’s Pyramids, Peru’s Machu Picchu or Italy’s Ancient Rome.

For anybody interested in human history and pre-history, the region just north of Gauteng provides a fundamental experience. It has, in recent years, consistently revealed secrets that go back to the beginning not just of
human life but of the events that led to humankind’s genesis in Africa.
Cradle of Life – the story of the Magaliesberg and the Cradle of Humankind (Struik Nature), portrays this region and its story holistically and with enthusiasm. It is heroic in its scope, brilliant in design and easily digestible.

The author, Vincent Carruthers, whose name is synonymous with the
Magaliesberg, has selected some spectacular photographs, as well as commissioned maps and graphics – about 500 illustrations in all – to produce something that is almost encyclopaedic though neatly chronological. More importantly, the layout offers so much to excite the eye that one is compelled to browse – to dash from one section to another, before going back and starting at the beginning.

Part One examines the ‘Life and Landscape’ of the region, starting with the Big Bang, the making of the universe, up to the first breath of life. The geology of the Cradle/Magaliesberg region and the time span of the events
that formed it have, for the layman (like me), never been easy to comprehend and I can only admire Carruthers for having so clearly sorted it for us.
The Magaliesberg/ Cradle area lies in the centre of what is known as the Kaapvaal Craton – a chunk of the earth’s crust that stretches from Southern Botswana down to the Karoo. This dome of land on which Pretoria and Johannesburg stand was Planet Earth’s first permanent landmass. It
emerged 3-billion years ago from the sea that entirely covered the planet. Volcanic islands would have previously popped up out of the sea but they would have rapidly (in geological terms) eroded away. The Magaliesberg reveals almost the entire story of life on earth. As one walks along the slabs of rock that cap its summit, one sees undisturbed tidal ripples – the bed of
that primordial sea. Ripples undisturbed, because 3-billion years ago, there were no creatures to disturb them. Planet Earth was barren, the air unbreathable.

Part Two (‘Human evolution’) describes the happenings in the rocky landscape below the Magaliesberg’s south-facing facade the Cradle of Humankind. This is where humans evolved. This is where scientists
are finding, on a regular basis in the dolomitic caves that honeycomb this World Heritage site, the fossilised remains of our ancestors from the ‘ape men’ to humans. When it comes to our origins, the Cradle has so much to tell us. Carruthers now narrows down the time scale from thinking
in billions of years to just the last few million years which suddenly seem like ‘recently’. The book reviews the sequence of events that followed that period when hominids and the apes divided, leaving chimps to go their way and us to go the other. The story is all there in the Cradle, written on cavern walls which sometimes gleam with fossilised bones.

This is the area that has, in recent years, startled the world with new discoveries leading to new insights into human evolution. It has propelled many scientists into worldwide fame beginning in the 1930s when Robert Broom, a general practitioner with an interest in fossils, used dynamite in the Cradle – to the horror of scientists to blast away some rock to discover the first adult skull of an ape man. His find, and those that have followed in the Cradle, stunned the crowd at the British Museum who’d pinned their scientific careers on a skull – a crude hoax as it turned out – (the Piltdown Skull) which, for 40 years, led them to believe the missing link was a bigbrained Englishman.
The Cradle is the happy hunting ground for famous paleoanthropologists such as professors Bob Brain, Phillip Tobias, Ron Clarke and Lee Berger, and their students who, in recent years, have turned the study of the human evolution on its head. If you’ve been a little confused about their recent finds (Australopithecus sediba and Homo naledi) here is a delightful
way to catch up with, possibly, the most comprehensively illustrated exposition available to the public.

Part Three deals with the boisterous history of the humans in the golden grasslands of the Magaliesberg/ Cradle hills. It takes the reader through the last 1,2 million years – from the Stone Age through to the Iron Age, whose crumbled settlements and furnaces are still there to see. The book looks at the wars that swished about these valleys when black fought black and white fought white and where miners burrowed into the hills, smashing stalagmites and stalactites – and fossils – for the limestone that helped build Johannesburg and Pretoria.

Cradle of Life is a gem of modern publishing – and I could not help thinking, as I became swallowed up by the narrative and the pictures, that there’s no way the electronic media can compete with this class of book – so easy to hold, so compact, so navigable, so enthralling to read at one’s own pace, and so handsome an object to leave lying around for the family or one’s visitors to browse.

By the way, Vincent Carruthers is the author of the 1990 best-selling The Magaliesberg which is still in print after almost 30 years!

MAGALIES MEMOIR No. 6 THE GREAT OBSERVATORIES OF THE MAGALIESBERG