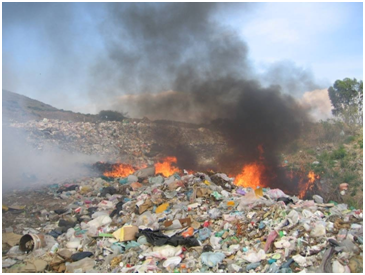 A Bad Smell from a Fire is also Bad for You

How often do we shake our heads and wonder how a seemingly healthy and energetic person became ill with cancer? One of the causes of cancer is from the air we breathe. When we make an open air fire in a waste pit to burn domestic waste we also burn plastic. Incineration of plastic waste in open areas is a major source of air pollution, which is harmful to human and anmal health, as well as to vegetation.

Domestic low temperature fires release toxic gasses like dioxins, furans, mercury and polychlorinated biphenyls (better known as BCPs) into the air which are cancer causing. Besides aerosol contamination, dioxins settle on crops and in our waterways where they eventually enter our food and get ingested into our bodies. These dioxins are potentially lethal persistent organic pollutants that can cause cancer and disrupt endocrine and respiratory systems.

Plastic chemical emissions are associated with a myriad of other health problems – they can aggravate respiratory ailments such as asthma and emphysema and cause rashes, nausea or headaches and allergies.  They can also increase the risk of heart disease, and impact the nervous system and even fertility.

In countries where domestic waste is incinerated to produce energy it is done at very high temperatures and the smoke that is released is done so through chimneys with scrubbers on them to capture the carcinogens.

Burning plastic also releases black carbon (soot), which contributes to climate change and air pollution – but studies have shown as much as 40% of the worlds garbage is burnt.

For the sake of your health please bring this danger to the attention of people who still make use of open air burns.

Rather Reduce and Recycle

Around the world, efforts are being made to reduce the amount of plastic we use, and in turn less plastic waste ends up in landfills or in our oceans. Burning plastic is not the answer. If your area has no municipal domestic waste removal and recycling service, why not consider supporting the waste  recyclers in your area by separating your waste at home and donating it to them – they make a few rand for every kilogram of recyclable plastic, tin and paper they collect.

In South Africa, most mixed layer products are not recyclable eg. chip packets, sweet wrappers, but even recyclable materials such as straws, bottle tops, fruit and veg carrier bags don’t make it for recycling. These items can be made into eco-bricks. An Ecobrick is a plastic 2 litre bottle stuffed tightly with clean and dry non recyclable plastic. These bottle bricks have been used around the world for over 20 years as an insulative building brick to deal with non-recyclable waste. Once packed really solid (so they dont dent at all when you crush them) these bottles can be used as ‘bricks’ to build green spaces, homes, schools, walls and furniture.

Due to the lockdown situation we cannot find eco-brick drop off initiatives currently, so for now, make something at home. For groovy ideas see @ecobrickExchange, @wasteED

What can go into an EcoBrick?

Think about what we throw away – seeing not waste, but opportunity.

Conservancies: Frontier of the Magaliesberg Biosphere