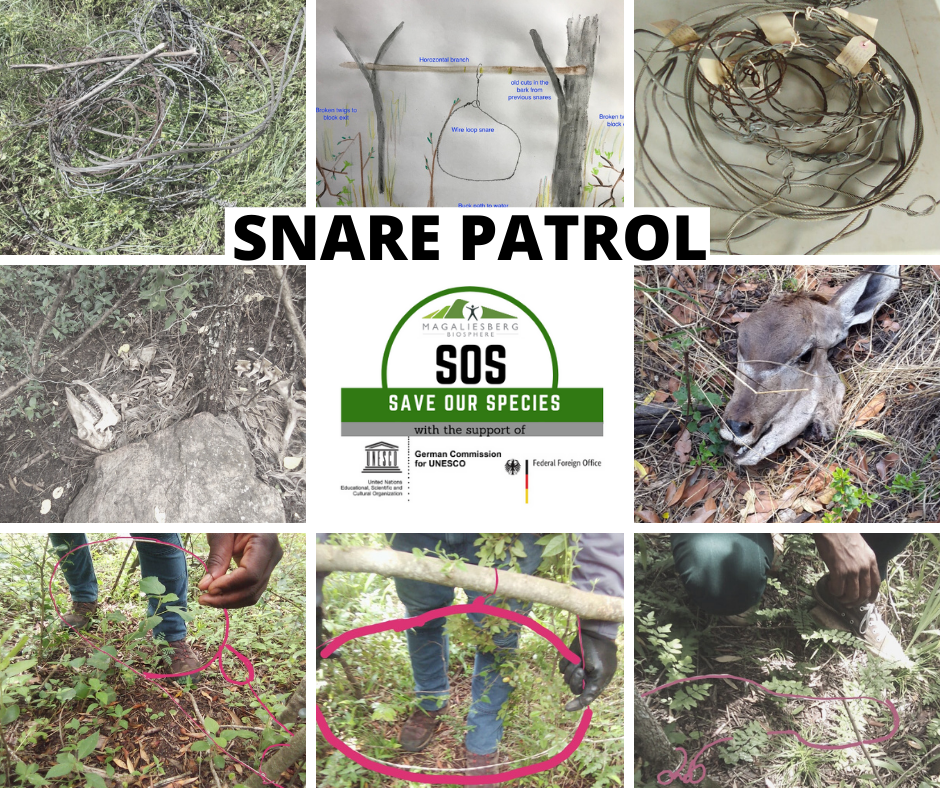 Since mid October, the Magaliesberg Biosphere SOS Project has facilitated over 30 anti-poaching snare sweeps and other conservation patrols, across the Magaliesberg Biosphere. These patrols have been coordinated by SOS Project partners with the support and cooperation of landowners. To date over 200 active snares and animal-traps have been removed from the veld, sparing the indiscriminate demise of much of our wildlife.

Early on in the project, the Eco-Rangers disarmed a snare-field of 20 snares where they found a freshly snared and skinned Kudu bull, destined for the bushmeat trade. A follow-up snare patrol in the same spot six weeks later saw a further 10 snares being removed, and tragically the rotting carcass of a bushbuck ewe caught in a snare, as well as her lamb, that likely died of starvation.

Snaring is an indiscriminate form of wildlife poaching, and while it may seem that trapping a guinea fowl or scrub-hare for the pot is harmless in the grater scheme of things, a number of  threatened  and protected species  are vulnerable to this form of poaching, especially when done at a commercial scale. Threatened species are classified according to their risk of extinction into several Red-List categories, according to International Union for the Conservation of Nature ( IUCN) or national biodiversity legislation Threatened Or Protected Species (TOPS) criteria.

Species such as Leopard, Brown Hyena, Honey Badger, Hedgehog and Mountain Reedbuck are some of the threatened or protected mammals that occur in our biosphere that could fall prey to indiscriminate trapping and snaring. Endemic (restricted range) species too, are vulnerable to anthropogenic threats and extinction.

Furthermore, many other species are home in the so-called green belts, or wildlife corridors of our biosphere. These untransformed habitats are surrounded by urban landscapes and agriculture, and pressure from increased fragmentation and habitat degradation (including snaring) threatens the functioning of these corridors to support the rich biodiversity that thankfully can still be found  there.

The conservation of the biodiversity that occurs in the Magaliesberg Biosphere is the responsibility of the people of the region, i.e. relevant government departments and officials, as well as the biosphere community.

Mining in the Magaliesberg Biosphere