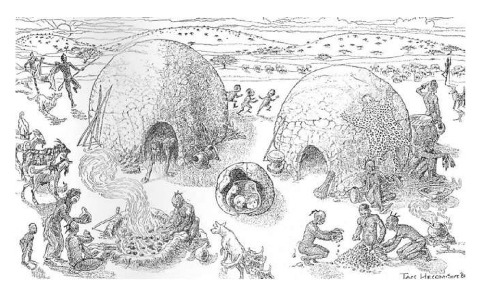 The Earliest Tswana settlement at Broederstroom 1500 years ago. (Illustration from Origins of the African People of the Johannesburg Area by Revil Mason (Johannesburg: Skotaville, 1987).

For the next few weeks, and possibly months, South Africans will be unable to congregate in large groups and MACH has been obliged to suspend its usual talks and outings. To keep our heritage spirit alive during these difficult times, the MACH Committee will distribute a monthly snippet of information about our wonderful Magaliesberg heritage from  available literature on this region.

This is the first of what we are calling Magalies Memoirs
In April we had planned to visit the Early Iron Age site at Toppieshoek. Revil Mason, the renowned archaeologist who discovered and excavated the site in the 1970s, was to have been our guest speaker. He would have unveiled a Blue Plaque to commemorate the site and addressed us on the ancient settlement and its importance.

On the southern bank of Hartbeespoort Dam lies the archaeological site of one of the oldest farming and herding settlements in South Africa. It comprised several small interlinked homesteads and was first excavated by the pioneering Wits University archaeologist Revil Mason in the 1970s.

The inhabitants of this settlement at Broederstroom were the first Iron Age people in the area, and another leading archaeologist at Wits University, Tom Huffman, later used styles and patterns on potsherds from the site to trace their origins via the KwaZulu-Natal east coast through East Africa and back to the birthplace of the Bantu languages east of Nigeria. The site reveals that people were practicing agriculture, farming livestock, making pottery and smelting iron in South Africa 1,600 years ago. They brought with them the linguistic roots of the Bantu languages now spoken by 80 per cent of South Africans, and introduced methods of farming and animal husbandry that gave them considerable advantages over the Stone Age nomadic hunter-gatherer way of life that had, until then, existed in the region.

The people of Broederstroom tilled the land and stored their produce in sealed underground pits lined with cattle dung. Methane gas from the dung lining of the pit controlled insect infestations, and grain stored in this way could last for several seasons. For daily use, grain was also kept in wicker storage bins raised on stones to keep out the damp.

Later Stone Age artifacts were found at the site, and it is probable that, as Stone Age culture declined in the face of Iron Age competition, these people were absorbed into, or subjugated by, the new settlers. The types of stone tools that have been recovered are similar to those found at Jubilee Cave elsewhere in the Magaliesberg and were used for scraping and preparing hides.  Stone Age people probably worked as servants performing that type of task.

The arrangement of dwellings and cattle kraals shows that the male-dominated central cattle pattern was introduced into South Africa at this early stage, together with the concept of bride-wealth, lobola, which characterizes social structures, kinship, and power in many South African societies to this day. Cattle were central to the economy, and a number of social norms were implicit in the central cattle pattern. Society was ranked according to kinship, with hereditary male leadership. Women were associated with agriculture and crops, and grain bins were situated in the female areas of the settlement. People lived in small circular rondavel huts clustered around the central cattle kraal. Each hut was about 3m to 4m in diameter and was made of interwoven saplings plastered with clay under a conical thatched roof. Ritual burial of the dead was also practiced, and the bodies of important male personages were buried in the cattle kraal in keeping with the significance of cattle in the society. Cowrie shells found at the Broederstroom site indicate that some form of trade or exchange through middlemen was evidently taking place with people along the Indian Ocean coast where cowries were used  as currency.

Iron was produced in three stages: mining, smelting, and forging. At Broederstroom ore was mined from surface deposits near the settlement. The miners took the ore to a smelting furnace where charcoal was brought to temperatures up to 1,500oC.
The metal bloom from the smelters was cooled and the metal-workers broke it up to separate the iron from unwanted slag and carbon. Metallurgical tests on an ingot block from Broederstroom showed that it had been cast by wrapping the pieces of impure iron in a fire-clay mold, and heating them in the furnace to weld them together and separate the remaining slag and charcoal contaminants. The mold would then have been removed from the fire and broken away to reveal the refined ingot, which was then taken to the forging furnaces for conversion into hoes, spears and other implements.

Five iron slag heaps have been unearthed at Broederstroom, suggesting that it was probably a fairly large production site. Smelting furnaces, as opposed to forges, have not been discovered, and may have been situated some distance away from the village. Few iron artifacts have been recovered; iron products could have been removed from the site by the people using them and cast aside to corrode away over thousands of years.